Marbella – A Pearl of Spain

After renting a POS four-banger that reeked of puke and over-zealous cleaning fluid, we attempted to drive to the Castillo de Monda on an empty Christmas night. We got lost about a block from the Europcar location (still in the airport), which would typify our driving experiences for the rest of the trip.

After considerable directional debate we continued through the beach towns of Torremolinos, Benalmádena Costa, Fuengirola and Cabopino along the Costa del Sol until we hit Marbella. We turned east from the coastline and drove approximately fifteen minutes into the mountains to the tiny town of Monda. Monda is a mini-gem; it maintains the authenticity of an old village with the modernity required of a new millennium. 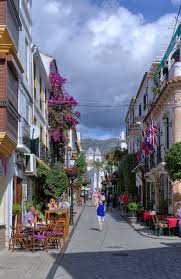 The streets are narrow, cobbled and lined with Disney-like orange trees vibrant with fruit. The doorways were flush with the sidewalk and often carried traces of past cultures: horseshoe arches with mosaic tiles and hidden courtyards.
We could see the castle at the top of the hill, but we couldn’t manage to figure out which road would get us there. The streets were so narrow and labyrinthine that it was difficult to navigate, let alone find turns that we missed previously. Eventually we got up the hill and were pleased with our perseverance. We pulled into the stone-arched entryway of the Castillo de Monda, which provided foreshadowing of the immense castle to follow.

The castle was recently converted to a hotel and was run by a bunch of Brits. The views from the castle were incredible: the far-reaching countryside and the town nestled in a valley. We truly felt like we were in a time warp – no cell phones, no crowds, no cars.

When we got to our rooms, we were equally surprised. Spacious, private, decorated in an Arabic theme and affording great views, we couldn’t believe our luck. But the real treat was the bathroom. It was equipped with an extra-long, extra-wide tub armed with spa jets and water pressure to knock the Peloponnesians on their ass. The tub’s faucet was adorned with a tiger’s mouth and this thing would literally project water into the tub like a fireman’s hose. Our bathroom window was covered with ivy, which gave it a more intimate feel. The bidet was also an added bonus for adventurous Americans.

We freshened up and decided to explore food options since it was Christmas night and we had not enjoyed a full meal yet. The fifth floor of the castle housed a bar (filled with Brits, Aussies, Germans), a library, a pool decorated with two tile flags, and a full-service restaurant. We decided to enjoy a respectable meal in the restaurant. Live entertainment was provided by Dorothy Day from Britain singing Jesus Christ Superstar, Somewhere Over the Rainbow, and Islands in the Stream with her trusty synthesizer. Since we were the only ones in the restaurant besides some of her friends we felt obligated to request some sappy favorites (we couldn’t come up with any). The food was ok…we were happy just to get something down besides airplane fare. We ate. We drank. We Slept.

The next day, the staff, smirking uncontrollably, asked us how everything was. Did we need anything? Have a great day. Hoo hah. We still had two nights to go! 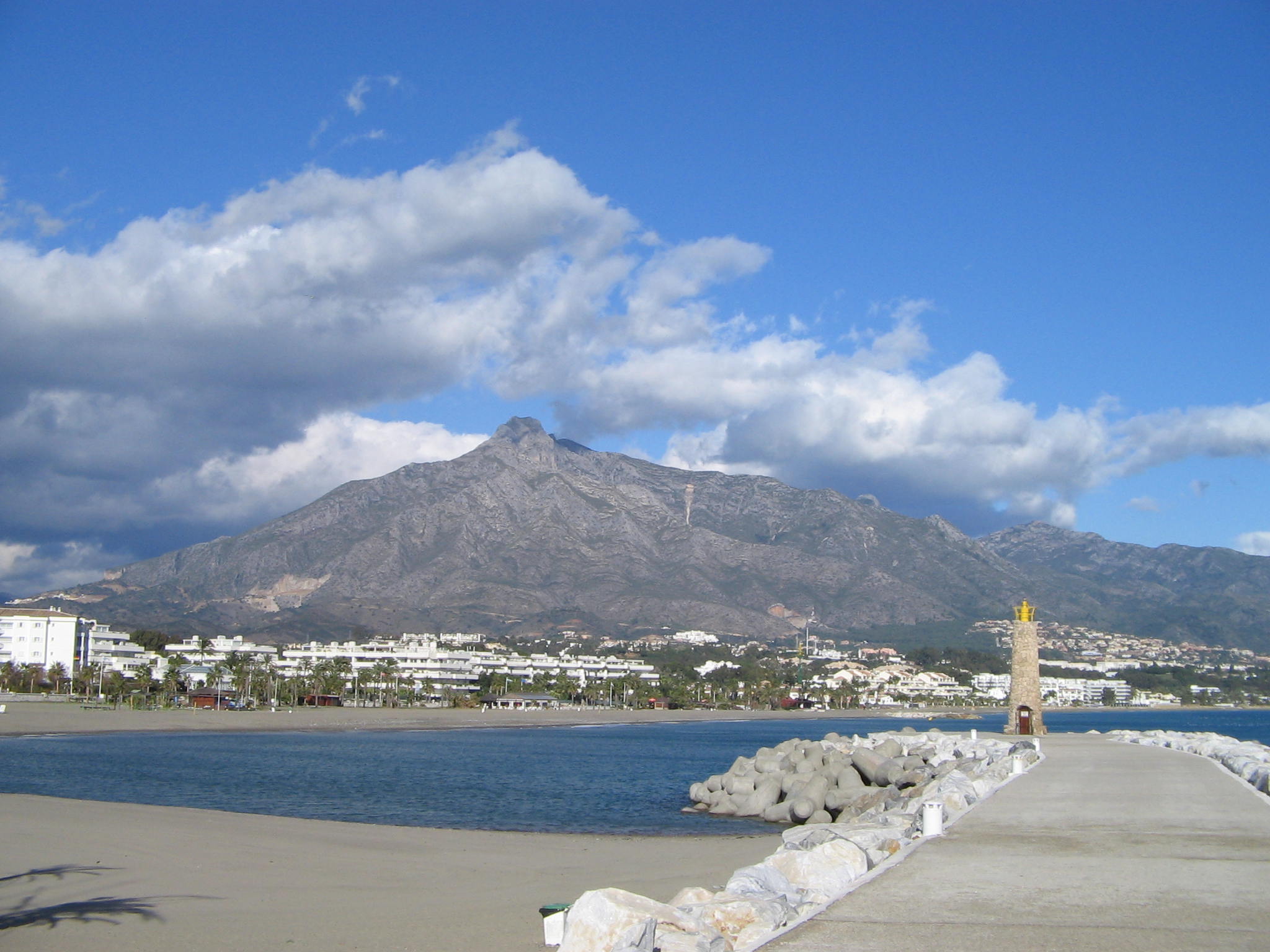 We hopped back in the stinky SEAT and headed halfway down the hill to a picturesque turnout that overlooked the village of Ojén. I yakked in the embankment while everyone else took pictures. Back down in Marbella, we ate on the patio at a restaurant a couple blocks from the main drag.

Jake and Christopher gobbled up some fishy-smelling, albeit tasty paella, while Suzie opted for spaghetti and I was happy with my bottle of water. After lunch we wandered around some of the boutiques and then headed down to the water. We enjoyed Marbella’s park with marble sidewalks and the sculptures that led down to the beach. Along the beach we stopped in at one of the many cafes for refreshments before wandering up and down the strip filled European tourists, Spaniards out for a Sunday stroll, and sunbathers soaking up the pleasant warmth in the middle of winter.

We could see how Marbella appealed to the masses trying to get away from the French Riviera – it seemed a bit more reasonable, less pretentious and filled with large resorts ready to accommodate a gaggle of people. The beaches were decent, not exactly white sand and exotic, but better than some resort towns I’ve been to in Mexico and the United States.

We stayed until the sun went down and then drove back up the hill to our hideaway. We figured it was time to dig into some tapas and see what all the hype was about. Walking into downtown Monda was convenient (no car trauma) and we stumbled upon a restaurant/bar that was extremely authentic. We were definitely the strangers in the bunch – everyone in there was part of their small community. We got lots of odd looks and one woman at the bar kept staring at my blond hair and American features. 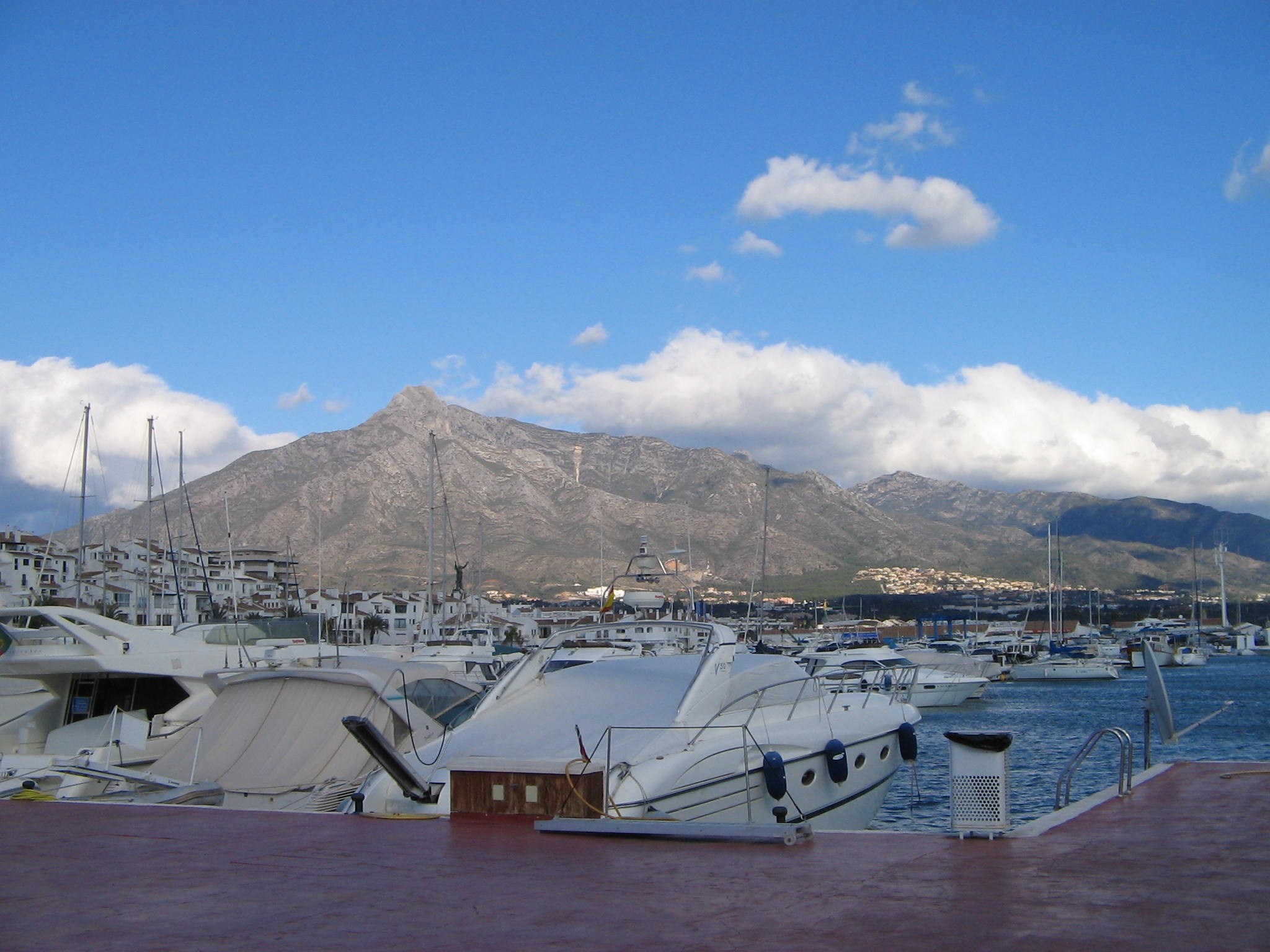 Although it was nerve-wracking ordering without a menu and I felt like an idiot because the Spaniards speak so fast and everyone was staring at us, we finally got through it. We ended up savoring extremely fresh calamari, green beans with ham, smoked fish, excellent olives, chicken skewers, and queso duro. In retrospect, it was the most authentic and flavorful meal we enjoyed during the whole trip.